skip to main | skip to sidebar


Open the CUI. (Type CUI from the command prompt.)

Our opinion is that you should create a new Cuix file for your customizations, but this will also work if you build it right into the c3d.cuix. It just won't be as easy to move it up when you upgrade the software.

From the Customize User Interface dialog, find and activate the Transfer tab. 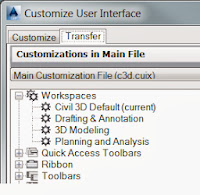 Hit the Save button on the far right of the dialog (we'll be working only on the right hand side until we go back to Customize tab) and save the new .cuix file somewhere you know where it is. I place mine in my user support folder, C:\Users\

Right-click where it says Workspaces and select Load File as Partial. 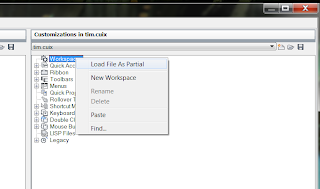 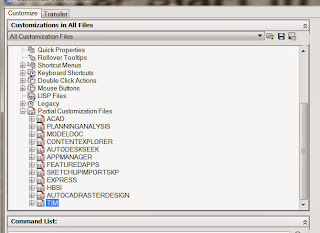 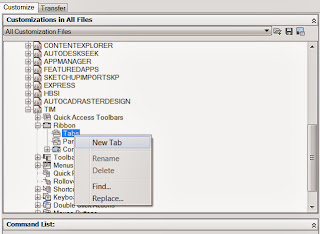 Change the tab's Default Display to Do not add to workspaces.

In the Commands list find Create Feature Line from Objects. Drag-n-drop that command onto Row1 of your new Panel.


Continue by dragging-n-dropping Add to Surface as Breakline, Create from Polyline (this creates an alignment from polyline), Create from Objects (creates a parcel from objects). Add Polyline Edit to get the Pedit command.
To add a layer pulldown, change from Custom Commands to Ribbon Control Elements. Drag-n-drop Layer List Combo Box to your panel.
Continue adding tools until you're satisfied, unless you're the type of person who is never "satisfied". If that's the case, continue adding tools for ten minutes and then stop. It's good enough for now, especially if you're on the clock.
Drag-n-drop the new Panel up onto the new Tab.


Big step now, just below where you have been adding commands to panels, find and expand Contextual Tab States. Drag and drop your new tab (we called it Polyline Selected) onto the Polyline object. Also drag it onto Polyline 3D Selected.

For each command that you place on your panel, select the command on the row and then modify its properties to control a text label, orientation and button image.

Press ok all the way out. Select a polyline.

Posted by Timothy Corey at 8:14 PM No comments: